9 Октября, 2019 17:34
Polynesian ships
Men of the beginnings of floating in the waters of Pacific Ocean and his seas in to deepest drevnostiyu long before our era from southeastern Asia to the islands of oceania on the boats with the beam and the catamarans moved the ancestors of present Polynesians, mikroneziytsev, Melanesians. The process of the population of oceania tightened itself to many centuries and was completed only at the beginning of our millenium. And in the course its ancient navigators wonderfully studied Pacific Ocean: his winds, flow, the inhabitants of waters. The inhabitants of Micronesia islands made the original maps, interlaced from the twigs, which they accurately indicated the location of islands and the direction of flows and winds. Polynesians knew how to take orientator to the stars and were constructed enormous, that contained several hundred people, law court.

Polynesians rightfully are considered the best people- seafarer of peace. Using the instruments of the Stone Age, they knew how to build the splendid vessels, with the aid of which they subjugated the spaces of the most great ocean of planet. Was this subjugation the realized, systematic process or the islands of polynesia did populate randomly, in the course of single floatings, similar by chance was the drift of different animals and plants to those originated volcanoes and by the corals of island in the ocean? Those ranks Of khiroa, the splendid expert of Polynesian culture, in the book "seafarers of solar rise" defended the first point of view, Andrews's novozelandets Sharp in the book "ancient travellers in Pacific Ocean" proved, that "polynesia - this many peaces in himself, the peaces of inaccessible, which could be opened only in the course of random migrations".

Especially capable seafarers were Polynesians. In the epoch, when in many respects the more civilized peoples of the Mediterranean and east cruised predominantly along the coasts and rarely they dared to leave into the open sea, Polynesians, who had available primitive technology, were released into the oceanic expanses, populating the new earth. Specifically, they already in X in. n. 3. they opened New Zealand.

Polynesian boat with the counterweight, so-called proa, this actually dual floating craft - catamaran. This device ensured stability during the agitation even to small little ship. Proa was that hollowed from the trunk of tree to pubes, which by two or several transverse bars was connected with the log of smaller size - counterweight. For the distant floatings the Polynesians used large, the contained to several hundred people, dual boats, built from the polished boards, fastened by ropes. Vegetable fiber served as material for the ropes. Vessels had the inclined mast, on which rose triangular sail from the mats. There were also oars. Usual timber covering was plotted for an increase in the useful cargo area by the cross connections connected boats. Was governed catamaran by steering oar.

Polynesians had available our own navigators. Priests, who knew the directions of sea currents and winds and be able to be oriented along the stars, were them. Distant floatings were accomplished by the significant flotillas, in which tens of vessels, after being erected in a semicircle, moved at a distance of straight visibility one from another, increasing by these the total area of the survey of flotilla.

The population of the Polynesians of Pacific Ocean islands continued approximately thousand years. Their vessels, which barely underwent changes, are used in this region to the present.

On the American continent deserves reference the "pre-Columbian" raft, which was being adapted for the transportation and for the catching of fish on the Pacific coast of South America. The construction of raft is well visible in the figure. It had a sufficient load capacity, since it consisted of it was trunk the bal'sovogo tree, whose wood is easier than plug, and it possesses a sufficient strength. Raft is moved either on the oars or with the aid of the straight sail, which was being attached to the dihedral mast. During the floating were used also coastal sea currents. Steering oars and auxiliary keel boards adapted for the retention of raft on the housing. On the deck of raft usually was arranged the shed, and from behind it, aft - center for the preparation of food.

Another floating craft, which adapts from the antiquity to the present for the transportation inside the continent and in the coastal sea regions, cane boat, shown in the figure. It is remarkable, that it was manufactured from vyazanok of reed and grass, almost also as ancient-Egyptian papyrus boat. Boat was moved predominantly on the oars and with the aid of the auxiliary straight sail, which was attached to by three-foot to mast. Control was produced by steering oar. Is surprising the load capacity of these little ships, which reached to four tons.

The Central American Indians of mayya swam along the coast and inside the continent on the simple, hollowed from it was trunk the tree of kanoe, which, although they reached 20 m of length, did not have a sail, which considerably limited their use. At the same low level in all probability aqueous communication also in North America, although reliable historical evidence, which relate to the predkolumbovskoy epoch was not preserved. 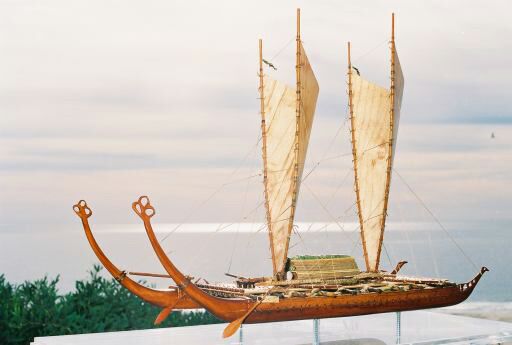